In the third COVID-Files entry Joachim Marnitz goes solo and talks about why he believes the German healthcare system is about to break down and why many institutions in the West are responding so poorly. An interesting benchmarking exercise looking at the efficiency of Seoul and Italy. And, some suggestions about what you can do. <br/> Please note that he has not gone solo because we have abandoned him due to his self-quarantine. We are constantly “in touch” and wish him all the best.

​The German healthcare system is about to break down

Healthcare officials in the West have put out some misleading advice on the Corona virus outbreak. A famous one is probably the line "masks don't work" and could be heard in many Western countries and newspapers. Scott Adams succinctly summarized the situation in this tweet.

Face masks don't work, so please stop hoarding them or else medical professionals will not have access to the stuff that doesn't work.

Meanwhile you can find posters such as this one in Seoul, courtesy of the Korean Medical Association:

It's notable that South Korea is the only big country with a mass outbreak that has managed to curb exponential growth so far, with a policy of maximum testing and transparency (and having the general population wear masks), which stands in stark contrast to that of most countries in Europe and the US. Smaller countries with huge success stories are Taiwan and Singapore, which also opted for maximum transparency and testing. And, mass mask wearing.

Germany on the other hand saw an explosion in officially confirmed cases, yet (unlike South Korea) elected to let public life go on relatively unrestricted: No football matches have been cancelled so far or closed to the public like in Italy; the Carnival was allowed to go on and schools will by and large remain open. And, Germany officially does not recommend masks, while simultaneously restricting their export. It would be much better and a trust-building exercise if they just admitted that they botched the planning, and asked the public for their cooperation. 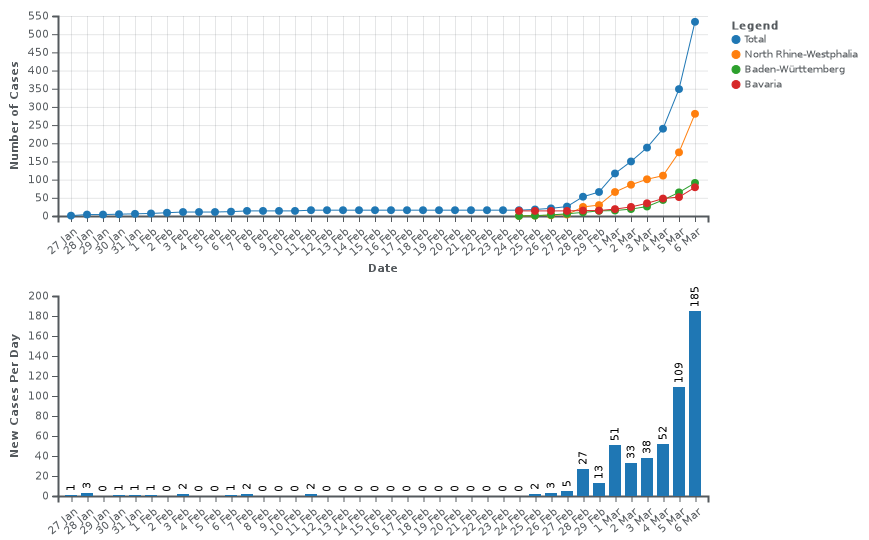 This outbreak looks very much like the one in Italy but, going forward there are and will be major differences between the two countries. Whilst Italy has introduced drastic measure such as cancelling football matches and closing down schools, universities as well as whole towns, Germany hasn't. Therefore, I predict that Germany's infection numbers will easily outpace those in Italy in about 2-3 weeks, when the true scope of the current spread will become visible - remember, in many cases the symptomatic phase only really starts when 14 or more days have passed since the infection.

Currently, the spread of the coronavirus in Germany roughly increases by an order of magnitude every week. So, you can just take the number of total infected today, multiply that by ten, and you'll have a reasonable estimate for the number of infected a week from now. Since very little is being done to curb this process, I expect the German healthcare system to be in very deep trouble within the next three weeks. Intensive care units will simply not have enough capacity by then. In my estimation the critical phase in Germany starts once they reach some 80,000 symptomatic infected cases. That may look far away now, but it really isn't when you realize how quickly the current exponential growth will get us there.

Why are some institutions responding so poorly in the West?

The main reason, as far as I can tell, seems to be linear thinking. Intuitively we are all very bad at thinking exponentially; it's one of the main reasons why a lot of people aren't good investors. So, decision-makers can, by and large, lack the “imagination” that things could get very bad in this crisis. Most people in Europe haven't really lived through one in their lifetimes.

They also are making the very common mistake of “fighting the last war”. Their response seems to be largely geared towards your typical flu epidemic or the last SARS outbreak, rather than a global pandemic of biblical proportions. In fact the worst case estimate of Belgium's minister of health, Maggie de Block, implies just that. She thinks that in the worst-case scenario, it will be like a bad case of the flu. Therefore, she expects Belgium to be well prepared and deems 500-700 intensive care unit beds to be enough. That would imply Belgium's breaking point will be reached once the country has more than 12,000 infected symptomatic cases.

Belgium has more time than Germany to enact appropriate measures, so the situation in Belgium may not necessarily deteriorate as much as it will in Germany. But, so far it isn't looking great, either.

So, what can the individual do?

There's some evidence that when the authorities fail, the people simply take action themselves. In Iran and Seattle people are simply staying home, rather than wait for anyone to order them to do it. The Khomeini airport in Tehran for example is still open, but is nonetheless deserted.

I have noticed that people who deal with market risks are viewing the situation differently than most working in the public sector, which is also reflected in this telling tweet by a Wall Street trader:

My VC & Wall St trader friends are prepping like mad.

My friends who work for bureaucracies just sort of shrug, waiting for someone else to tell them what to do.

My personal view is similar: I like to protect myself against potentially catastrophic downsides. So other than avoiding crowded places, staying home and stocking up on food so I can stay home, I am also trying to fortify my last line of defence: I take ample amounts of vitamin C and D. This won't save me from contracting COVID-19, but it has good potential to lessen symptoms, while providing little downside.

I also like to consume elderberry sirup at the first onset of any cold-like symptoms. This can help with easing symptoms as well. And if not: The downside should be negligible.

But, please make sure to consult your doctor or pharmacist before taking action yourself.

Other than that, I recommend you follow the guidelines by the Korean Medical Association. They at least seem to know what they're doing.