Predictions in politics have always been important for society, decision-makers, and gambling. Yet, even now, not many prediction-makers get it right. Trump won and Brexit was voted on. Politics are mostly about human interaction and the context within which they are done. This is why Joachim Marnitz and Glenn Cezanne look beyond big data and statistical analysis. Join them in their experiment. They believe Trump will win again. It’s worth noting Joachim predicted him to win in 2016 - and as a professional punter placed his bets accordingly.

What approval ratings (don’t) tell us

This is the first instalment of a series that explains in detail why Trump will be re-elected in 2020.

And before we get to the actual point: No, we don’t view the new Ukraine whistle blower affair as any threat for him at all. You can find the whole transcript here, while the whistle blower complaint has been published here.

The most important hint is right on page one: “I was not a direct witness to most of the events described.”

Of course, there are no certainties in the real world: We do see two scenarios in which he could lose next year. But short of a major recession or successful assassination attempt he will be victorious.

Let us explain why.

His approval ratings are kinda low, aren’t they?

If you looked at Trump’s aggregated approval ratings as presented on Nate Silver’s Fivethirtyeight, you could be forgiven for thinking that his chances of re-election are slim: 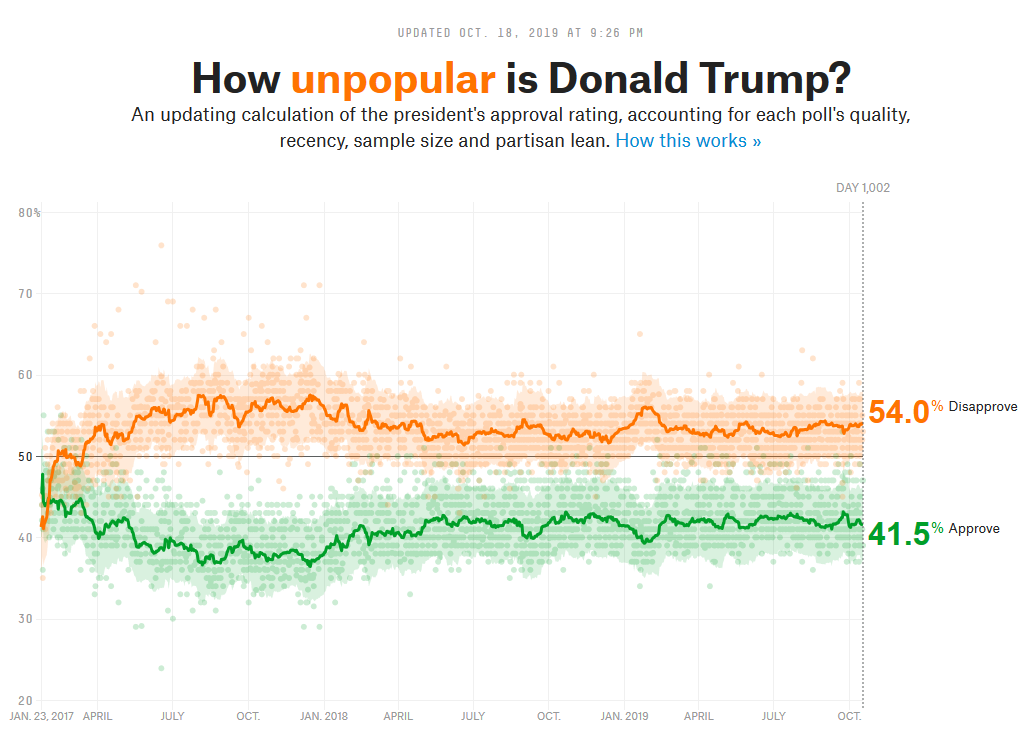 Fivethirtyeight themselves claim in this (recent) article:

“If it doesn’t notably improve, Trump’s approval might sink him in 2020.”

But the approval rating as shown by 538 doesn’t tell the whole story. For starters it is very useful to put Trump’s current approval rating into historical perspective. This is what it looks like compared to other US presidents in recent history as shown on 538, further down the page: 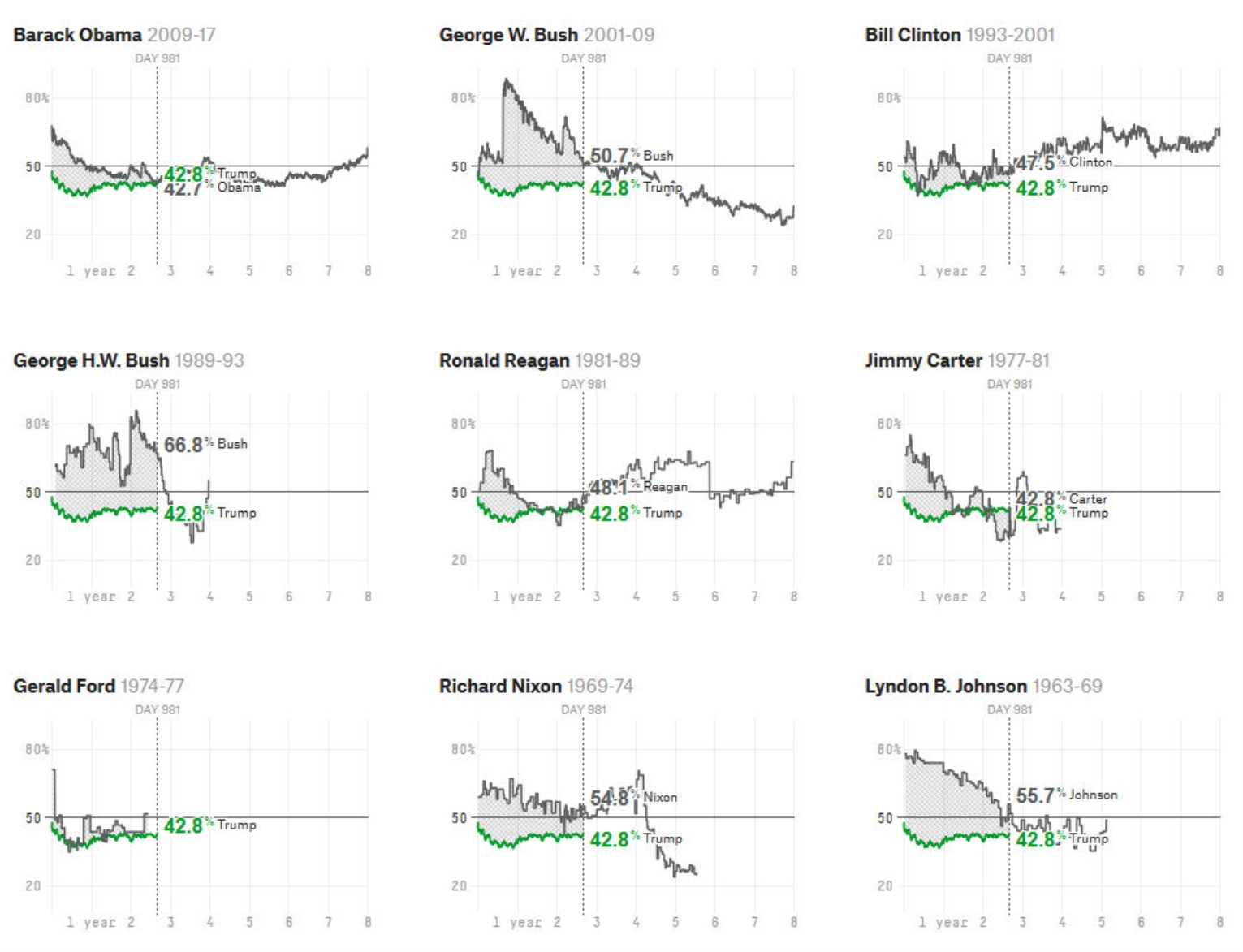 Notably Trump’s approval rating is almost exactly where Ronald Reagan’s and Barack Obama’s were at the same time into their respective presidencies, and both of them ran successfully for a second term.

Especially Obama makes for an interesting comparison here, because of the way the media chose to cover both presidents. While Obama was President, FOX News covered him in a very negative light. But the rest of the media was by and large favourable in their reporting about his administration.

Under Trump the tables have (predictably) turned completely: MSNBC, CNBC and CNN all cover Trump very negatively now, whereas FOX news usually paints him in a positive light. While FOX News does have a larger market share than the other three channels, it is still less than all of them combined.

In summary: Trump has about the same approval rating as Obama did at the time, despite a hostile media environment (especially if you take newspapers into account as well) that he actively antagonises.

How important are approval ratings really?

It isn’t obvious to us that approval ratings are still as important as people would like to think. Consider that Trump and Clinton both went into election night with historically low approval ratings: 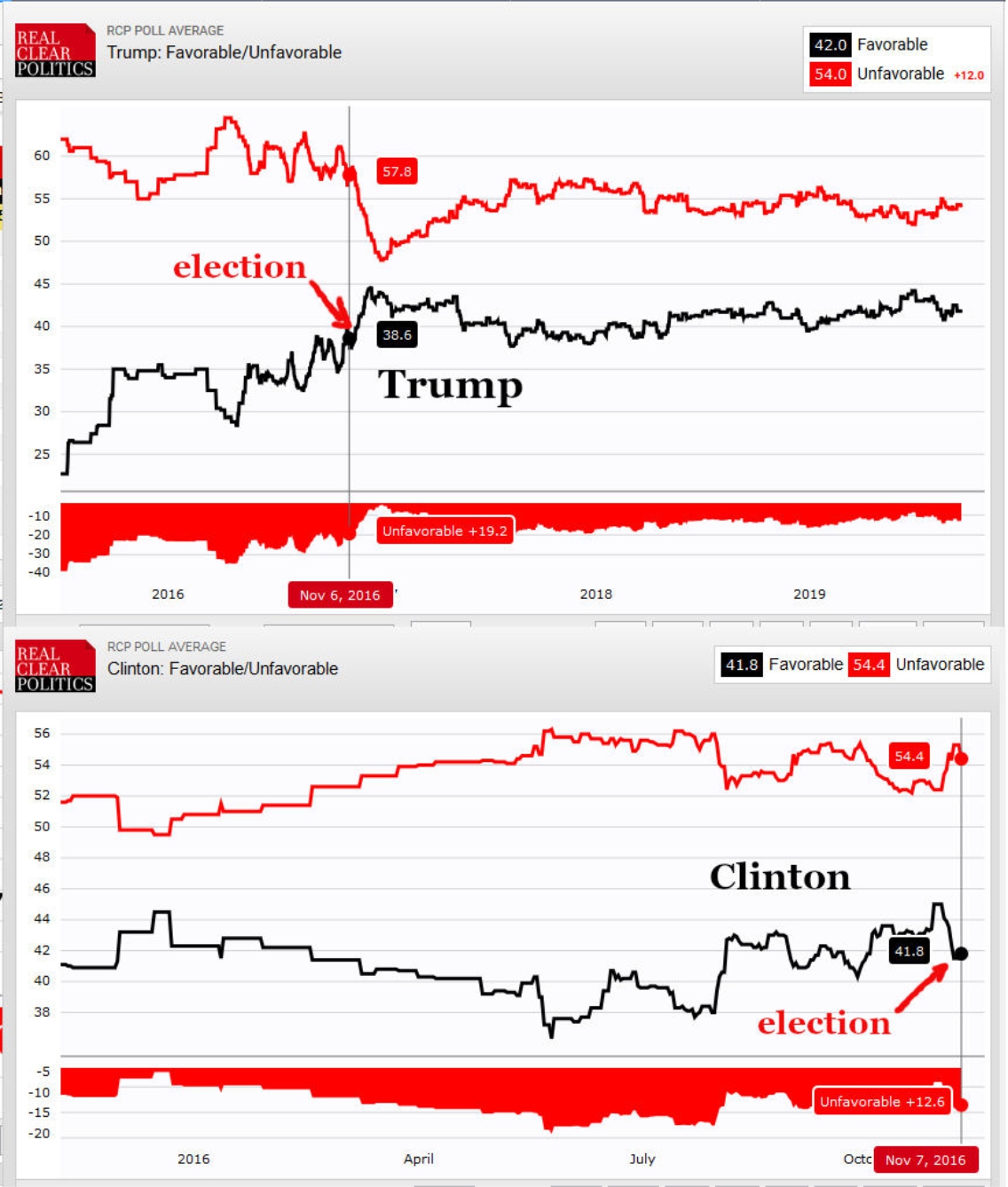 And as you can see, Trump’s approval ratings at the time of his election were actually less favourable than they are now; and notably less favourable than those of Clinton. He got elected anyway. While the disdain that many people had for Hillary certainly played an important role, we think this picture won’t look much different with any of the current candidates of the Democratic Party on election day.